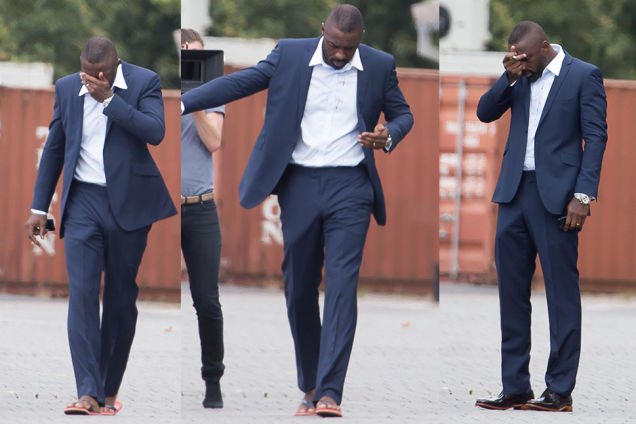 “Is it just me or is it totally weird that he’s wearing flip flops with a suit?” my cousin quipped this past weekend while looking at images of Idris Elba as we waited for a cab to pick us up in Montauk.

“Wait is that his penis?” was the second question my cousin posed. The shots in question were captured on the London set of his new movie “A Hundred Streets”, that actually turned out to be a questionably-placed mic wire. Although the bulge was allegedly an illusion to the dismay of many, it wasn’t long before the Internet went abuzz at the sight of his apparently enormous package.

Idris thought this situation was comical and took to Twitter on Saturday to set the recorded straight. ‘The good news is i got a shit load of followers. The bad news is, that is a mic wire,’ he tweeted his now 1.17 million fans, along with the hashtag, ‘Ego went into spaceship mode though.’

Quite amused with the situation, the dapper actor kept the joke going tweeting today: “Calvin Klein called my mobile, they want me in their next campaign. Foot long john’s Coming Winter 2014. #egowentintospaceshipmodethough”

So guys, if you’re looking to end summer with a bang and get your twitter following up, toss your briefs, slip in a pair of sweats or lightweight trousers and take to the streets.