Is The Rise of The Spornosexual Really Such A Bad Thing?

The metrosexual is no more, long live the spornosexual.

Not to sound like Gus Portokalos from My Big Fat Greek Wedding, but did you know the word gym comes from the Greek term gymnós meaning “naked”? Not a complete surprise considering we all want to look better naked and one way to do this is by hitting the gym. It’s a well known fact athletes competed nude in Ancient Greece to encourage aesthetic inspiration of the male body and as a tribute to the gods. Could we be moving towards a naked, body focused way of life again? And if so, why is this fascination with the male form a negative thing?

In today’s selfie-adoring world it comes as no surprise men have taken a new interest in their bodies. Why not? It’s healthy to work out, feel good in your skin and take a selfie that you feel proud of. If your time at the gym isn’t affecting your day-to-day life, what’s the problem?

With our innate love for labeling and interest in social origination, it was only a matter of time before someone coined a term for these fit gentlemen.  Mark Simpson, the guy who straight men that like manicures can thank for the term “metrosexual”, recently said that there’s a new species of hypersexualized men in town called the “spornosexual”. To be completely honest, I wasn’t a fan of the metrosexual label and am equally unimpressed with his new term. The spornosexual is a so-called beefier, version of its urbane counterpart that Simpson describes as having an obsession with working out. “Their own bodies…have become the ultimate accessories,” he explains. 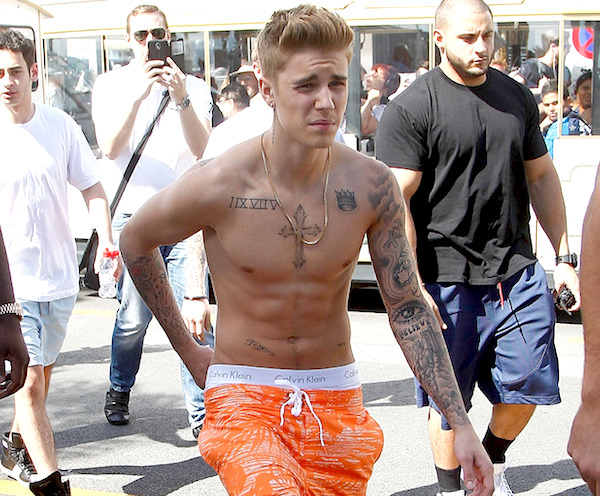 He believes that these dudes care more about what they looks like, rather than what’s inside. We’ve all heard this expression before. I think it was my grandmother who I last heard say this line. In following his guidelines, modern spornosexuals could include Justin Bieber, Colin Kaepernick and David Beckham. Despite Justin’s love for mischief, I truly believe there is more going on with all of these men then an all day workout plan.

I understand Simpson’s concern with men spending too much time with dumbbells, they don’t pay the bills after all and aren’t vey good at fourplay. However I don’t think we should be creating more labels in contemporary society. There wasn’t anything wrong when the Ancient Greeks were body obsessed. Why is it a problem now? What’s the difference between admiring a stunningly crafted male statue and a painstakingly sculpted shirtless instagram shot?

Now if you excuse me, I’m late for my Friday workout at the gym where I will be running on the treadmill to this song.